Lipotropes are compounds that may aid in the breakdown of body fat by acting on lipid metabolism and synthesis pathways. When used in combination with lifestyle modifications such as exercise and diet, lipotropic compounds may promote fat and weight loss.

Lipotropic compounds including vitamins, nutrients, and other natural or pharmacological agents may be administered as injections or in the form of oral supplements. Injections provide the advantage of better bioavailability by avoiding enzymes in the gastrointestinal tract. In addition, injections may be especially beneficial in individuals with gastrointestinal absorption issues.

The lipotropic agents in this injection are methionine and choline. While each may individually affect the mobilization of fats, the combination may provide synergistic benefits.Best, C. H., Lucas, C. C., Ridout, J. H. & Patterson, J. M. DOSE-RESPONSE CURVES IN THE ESTIMATION OF POTENCY OF LIPOTROPIC AGENTS*.Kenney, J. L. & Carlberg, K. A. The effect of choline and myo-inositol on liver and carcass fat levels in aerobically trained rats. Int. J. Sports Med. 16, 114–116 (1995).Andersen, D. B. & Holub, B. J. The relative response of hepatic lipids in the rat to graded levels of dietary myo-inositol and other lipotropes. J. Nutr. 110, 496–504 (1980). The physiological role of each compound and the effects of supplementation are described below.

The lipotropic effects of methionine may be attributed to its metabolite S-adenosyl methionine (SAM). SAM is synthesized from methionine via an energy-consuming reaction. SAM administered orally or by injection has been investigated as a treatment for liver diseases, osteoarthritis, and depression.S-Adenosyl-L-Methionine (SAMe): In Depth | NCCIH. https://www.nccih.nih.gov/health/sadenosyllmethionine-same-in-depth. The benefits bestowed by SAM may be due to its role as a methyl donor in biochemical processes governing lipid homeostasis, DNA stability, gene expression, and neurotransmitter release.Chiang, P. K. et al. S‐Adenosylmetliionine and methylation. FASEB J. 10, 471–480 (1996).Obeid, R. & Herrmann, W. Homocysteine and lipids: S-Adenosyl methionine as a key intermediate. FEBS Letters vol. 583 1215–1225 (2009).Sharma, A. et al. S-adenosylmethionine (SAMe) for neuropsychiatric disorders: A clinician-oriented review of research. Journal of Clinical Psychiatry vol. 78 e656–e667 (2017).

Choline is an essential nutrient required for optimal functioning of various tissues including the liver, muscles, and brain.Wallace, T. C. et al. The underconsumed and underappreciated essential nutrient. Nutr. Today 53, 240–253 (2018). Since choline breaks down fat as an energy source, choline supplementation caused rapid fat and weight loss in female athletes.Elsawy, G., Abdelrahman, O. & Hamza, A. Effect of choline supplementation on rapid weight loss and biochemical variables among female taekwondo and judo athletes. J. Hum. Kinet. 40, 77–82 (2014). Only small amounts of choline are synthesized by the human body, necessitating its intake from external sources. In the body, about 95% of the total choline pool is converted to phosphatidylcholine – an essential component of the phospholipid bilayer and the predominant phospholipid in most mammalian cells.Li, Z. & Vance, D. E. Phosphatidylcholine and choline homeostasis. (2020). Choline also undergoes acetylation to form the neurotransmitter acetylcholine. Choline deficiency causes hepatic steatosis (fatty liver disease) and leads to loss of muscle membrane integrity. Chronic choline deficiency may also increase the risk of developing cancer.

Upcoming evidence indicates that the choline metabolite trimethylamine-N-oxide may be a risk factor for cardiovascular diseases. Studies in animal models suggest that TMAO may be atherogenic and prothrombotic. Therefore, Lipo-MIC injections are contraindicated in individuals with cardiovascular disorders. S-adenosyl methionine may worsen the symptoms of mania in people with bipolar disorder.S-Adenosyl-L-Methionine (SAMe): In Depth | NCCIH. https://www.nccih.nih.gov/health/sadenosyllmethionine-same-in-depth. Consult a physician before use.

There are no randomized, controlled trials studying the effect of Lipo-MIC injections on pregnant and lactating women or their offspring. Human and animal studies on each constituent compound may offer some insights.

Excess methionine in the maternal diet may be detrimental to fetal development. This is because additional glycine and serine may be required to catabolize the excess methionine, inadvertently resulting in the deficiency of these amino acids. Excess methionine may also be metabolized to homocysteine. Elevated plasma homocysteine levels are associated with preeclampsia, spontaneous abortion, placental rupture, and miscarriage.Rees, W. D., Wilson, F. A. & Maloney, C. A. Sulfur amino acid metabolism in pregnancy: The impact of methionine in the maternal diet. in Journal of Nutrition vol. 136 1701–1705 (American Institute of Nutrition, 2006).

Women who are pregnant, planning to be pregnant, or are breastfeeding must consult their physician regarding the use of lipotropic injections for weight loss.

The methionine metabolite S-adenosyl methionine (SAM) may interact with antidepressants, antipsychotics, amphetamines, and narcotics causing excess accumulation of serotonin in the body. It may also interact with the cough suppressant dextromethorphan and the dietary supplement St. John’s wort, leading to increased risk of serotonin syndrome.SAMe – Mayo Clinic. https://www.mayoclinic.org/drugs-supplements-same/art-20364924. Mild symptoms of serotonin syndrome include shivering and diarrhea, while severe symptoms include muscle rigidity, fever, and seizures.

Choline is not known to have any clinically relevant interactions with drugs, supplements, or foods.Choline – Health Professional Fact Sheet. https://ods.od.nih.gov/factsheets/Choline-HealthProfessional/.

Potential side effects of lipotropic injections include:

This is not a comprehensive list of adverse effects. If you experience rash, hives, itchiness, shortness of breath, or other symptoms of an allergic reaction, please discontinue use immediately and consult your physician. Side effects may vary from person to person.

Store this medication at 68°F to 77°F (20°C to 25°C) and away from heat, moisture and light. Keep all medicine out of the reach of children. Throw away any unused medicine after the beyond-use date. Do not flush unused medications or pour down a sink or drain 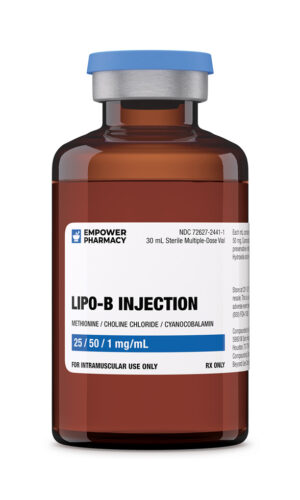