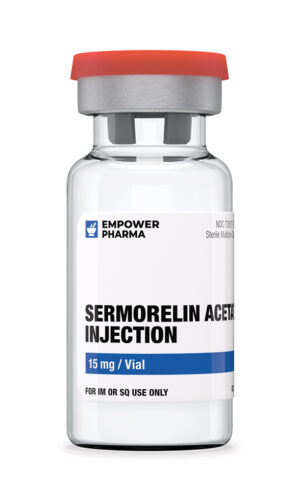 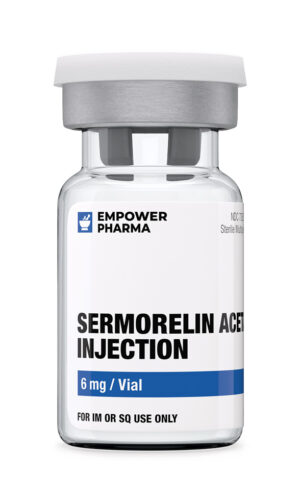 Sermorelin acts on the growth hormone releasing hormone receptor (GHRHr) in the pituitary to regulate cellular activities. GHRHr is the natural receptor for the endogenous hormone, GHRH, and for sermorelin. This receptor regulates growth hormone release directly by stimulation and indirectly by a feedback relationships with somatostatin.Howard AD, Feighner SD, Cully DF et al. 1996, A Receptor in Pituitary and Hypothalamus That Functions in GH release. Science. Vol. 273, Issue 5277, pp. 974-977

Tell your doctor of all prescription and nonprescription medication you may use, especially: corticosteroids and thyroid medications. This drug may affect the results of certain lab tests (e.g., inorganic phosphorus, alkaline phosphatase). Make sure laboratory personnel and your doctors know you use this drug. Do not start or stop any medicine without approval from your healthcare provider. Hypothyroidism: Untreated hypothyroidism can jeopardize the response to Sermorelin. Thyroid hormone determinations should be performed before the initiation and during therapy. Thyroid hormone replacement therapy should be initiated when indicated. Intracranial lesions: Patients with GH deficiency secondary to an intracranial lesion were not studied in clinical trials; Sermorelin treatment is not recommended in such patients. Obesity, hyperglycemia or hyperlipidemia: Subnormal GH responses have been seen in obesity and hyperglycemia, and in patients with elevated plasma fatty acids.

FDA pregnancy risk category C. Exercise caution during lactation; it is not known if this drug is excreted in breast milk. Laboratory Tests: Serum levels of inorganic phosphorus, alkaline phosphatase, GH and IGF-I may increase with therapeutic use. Corticosteroids: Glucocorticoids may inhibit the response to Sermorelin. Controlled studies did not indicate an interaction of Sermorelin with drugs commonly used in the treatment of routine pediatric problems/illnesses. However, formal drug interaction studies have not been conducted

Call your doctor for medical advice if pain/swelling/redness occurs at the injection site (occurring in approximately 16% of patients). Other possible, but less common side effects of rhGH (not Sermorelin) are upper respiratory conditions, nerve sensitivity, insomnia, depression, nausea, hypothyroidism chest pain, gynecomastia, headache, flushing, dysphagia, dizziness, hyperactivity, somnolence, urticaria and sore bones. Call your health care provider immediately if you are experiencing trouble swallowing, vomiting, and tightness in the chest. Antibody formation to Sermorelin has been reported after chronic subcutaneous administration of large doses but their clinical significance is unknown. Antibodies do not appear to affect growth hormone release nor appear to be related to a specific adverse drug reaction profile. No generalized allergic reactions have been reported. A temporary allergic reaction described by severe redness, swelling and urticaria at the injection sites has been reported in one patient who developed antibodies. Additionally, its use may reduce insulin sensitivity, thereby raising blood sugar to levels which could be harmful to diabetes sufferers. It may also decrease triiodothyronine (T3) levels due to its tendency to reduce the bodily levels of sodium, potassium, and phosphorous.

Store dry powder at 68°F to 77°F (20°C to 25°C) and away from heat, moisture and light. Once reconstituted keep this medicine in a refrigerator between 36°F to 46°F (2°C to 8°C). Keep all medicine out of the reach of children. Throw away any unused medicine after the beyond-use date. Do not flush unused medications or pour down a sink or drain.