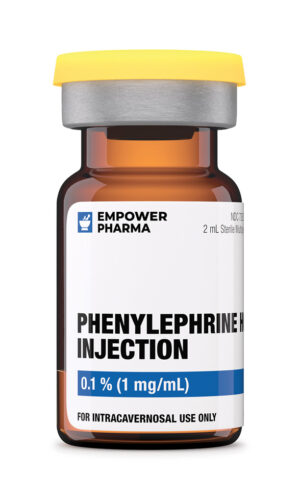 Phenylephrine is a synthetic sympathomimetic amine with selectivity for the alpha-1-adrenergic receptor. Phenylephrine lacks significant inotropic and chronotropic effectsPhenylephrine hydrochloride injection package insert. Lake Forest, IL: Hospira, Inc.; 2005 Nov. Phenylephrine is used orally and intranasally to treat nasal congestion. Use in younger children has been associated with an increased risk of serious adverse effects; as a result, the FDA issued a public health advisory recommending that OTC cough and cold products not be used in infants and children < 2 years of age.Centers for Disease Control and Prevention (CDC). Infant deaths associated with cough and cold medications – two states, 2005. MMWR Weekly 2007;56:1-4. Parenterally, phenylephrine may reduce heart rate and cardiac output as a reflex response to its potent vasopressor effects, which is the rationale for its use to treat paroxysmal supraventricular tachycardia. Since it is a potent vasoconstrictor, phenylephrine injection can be used as a vasopressor; however the predominance of alpha-effects and lack of beta-1 inotropic effects limits the use of phenylephrine for the treatment of shock states. Phenylephrine injection was FDA-approved in December 2012.Phenylephrine hydrochloride injection. Eatontown, NJ: West-Ward Pharmaceuticals; 12 Dec.Vazculep (phenylephrine) Inj package insert. Chesterfield, Mo: Eclat Pharmaceuticals; 2014 Jun.

Phenylephrine should be avoided in patients with cerebrovascular disease such as cerebral arteriosclerosis, aneurysm, intracranial bleeding, history or stroke or organic brain syndrome because of the potential sympathomimetic (presumably alpha) effects in the CNS and the potential for cerebrovascular hemorrhage, especially with intravenous use.

Phenylephrine should be avoided in patients with sulfite hypersensitivity unless the patient is being treated for an emergent condition such as anaphylaxis or cardiac arrest. Phenylephrine formulations contain sodium metabisulfite, a sulfite that can cause severe allergic-type reactions, including anaphylaxis and life-threatening or less severe asthmatic episodes in susceptible patients. The overall presence of sulfite hypersensitivity in the general population is unknown but presumed to be low. Sulfite hypersensitivity is seen most often in asthmatic patients compared to non-asthmatic patient.Phenylephrine hydrochloride injection package insert. Lake Forest, IL: Hospira, Inc.; 2005 Nov.Phenylephrine hydrochloride injection. Eatontown, NJ: West-Ward Pharmaceuticals; 12 Dec.Vazculep (phenylephrine) Inj package insert. Chesterfield, Mo: Eclat Pharmaceuticals; 2014 Jun.

Systemic phenylephrine products should be used with caution in men with symptomatic, benign prostatic hypertrophy, due to the potential for urinary retention.

Phenylephrine is classified as FDA pregnancy category C.Phenylephrine hydrochloride package insert. Eatontown, NJ: West-ward Pharmaceuticals; 2011 May. It should be used during pregnancy with caution. Topically applied phenylephrine is expected to provide reduced exposure systemically versus oral or injectable routes. Systemic phenylephrine must be used only when the benefit to the mother outweighs the risk to the fetus during late pregnancy, labor, or obstetric delivery; when used during this time it can cause fetal anoxia and/or bradycardia due to increased uterine contractility or decreased uterine blood flow.Smith NT, Corbascio AN. The use and misuse of pressor agents. Anesthesiology 1970;33:58-101. Obstetricians should also be aware of the risk of severe persistent hypertension if it is used during labor and delivery and the possibility of rupture of a cerebral blood vessel in the postpartum period.Phenylephrine hydrochloride package insert. Eatontown, NJ: West-ward Pharmaceuticals; 2011 May.

It is not known whether phenylephrine is distributed into breast milk; however, the low molecular weight of the drug would suggest possible passage. According to the manufacturer, caution should be exercised when administering it to women who are breastfeeding their infants.Phenylephrine hydrochloride package insert. Eatontown, NJ: West-ward Pharmaceuticals; 2011 May. However, since phenylephrine is generally poorly absorbed, the potential overall absorption by an infant following breastfeeding may be minimal. In the treatment of nasal congestion, non-systemic decongestant preparations such as intranasal sodium chloride or temporary use of intranasal decongestants should be considered prior to consideration of an oral decongestant. Consider the benefits of breastfeeding, the risk of potential infant drug exposure, and the risk of an untreated or inadequately treated condition. If a breastfeeding infant experiences an adverse effect related to a maternally ingested drug, healthcare providers are encouraged to report the adverse effect to the FDA.

Phenylephrine can potentiate the effects and increase the toxicity of other sympathomimetics including cocaine by adding to their sympathomimetic activity.Hoffman BB, Lefkowitz RJ. Catecholamines and sympathomimetic drugs. Gilman AG, Rall TW, Nies AS, Taylor P, (eds.) In: Goodman and Gilman’s Pharmacological Basis of Therapeutics. 8th ed., New York, Pergamon Press. 1990. 187—91. Although no data are available, phenylephrine should be used cautiously in patients using significant quantities of amphetamines, cocaine, or other sympathomimetic-containing products.

Caffeine is a CNS-stimulant,Cafcit® (caffeine citrate) package insert. Evansville, IN: Mead Johnson & Company; 2003 May. and, although data are lacking with phenylephrine, concurrent administration may produce excessive stimulatory effects such as nervousness, irritability, insomnia, or tremor. Other xanthines, such as theophylline, aminophylline or dyphylline can interact in a similar way.Weinberger M, Bronsky E, Bensch GW, et al. Interaction of ephedrine and theophylline. Clin Pharmacol Ther1975;17:585—92. Excessive caffeine ingestion should be avoided while taking phenylephrine concurrently. This includes ingestion of foods and beverages that contain high amounts of caffeine such as coffee, teas, green tea, colas, and chocolate and dietary supplements such as guarana.Henman A. Guarana (Paullinia cupana var. sorbilis): ecological and social perspectives on an economic plant of the central Amazon basin. J Ethnopharmacol 1982;6:311—38.

MAOIs, or drugs that possess MAO-inhibiting activity such as furazolidone, linezolid, or procarbazine, can prolong and intensify the cardiac stimulation and vasopressor effects of sympathomimetics.Boakes AJ, Laurence DR, Teoh PC, et al. Interactions between sympathomimetic amines and antidepressant agents in man. Br Med J 1973;1:311—5. Phenelzine and tranylcypromine appear to produce the greatest risk since these two MAOIs also have intrinsic amphetamine-like activity. In the presence of MAOIs, phenylephrine and other drugs that cause release of norepinephrine induce severe cardiovascular and cerebrovascular responses. Although it is unclear if selegiline (inhibitor of MAO type B) can predispose to this reaction, caution is advised for concurrent use of phenylephrine with any MAO-inhibiting drug. Phenylephrine should not be administered during or within 14 days following the use of most MAOIs or drugs with MAO-inhibiting activity. However, rasagiline is a selective MAO-B inhibitor at manufacturer recommended doses; serious reactions with sympathomimetics are not ordinarily expected.Azilect (rasagiline mesylate) tablets. Kansas City, MO: Teva Neurosciences, Inc.; 2014 May. However, because a case of elevated blood pressure occurred during use of rasagiline and a sympathomimetic ophthalmic preparation, caution is advised when rasagiline is administered with sympathomimetics.

The coadministration of oxytocin with medications that can induce vasoconstriction, such as phenylephrine, may result in severe persistent hypertension.Pitocin® (oxytocin injection, USP) package insert. Rochester, MI: Monarch Pharmaceuticals; 2003 Jan.

Concomitant use of nitrates with systemic sympathomimetics, including phenylephrine, can result in antagonism of the antianginal effects of the nitrate.Nitro-Dur® (nitroglycerin) package insert. Kenilworth, NJ; Key Pharmaceuticals, Inc.; 2003 August.

Drug interactions with St. John’s wort, Hypericum perforatum are unclear at this time. Some of the components of this herb have been shown to inhibit monoamine oxidase (MAO) in vitro, but in vivo activity is unclear. If St. John’s wort does have MAOI-like activities, it could potentially increase the cardiac stimulation and vasopressor effects of the sympathomimetics. St. John’s wort should be used cautiously with any sympathomimetic agent.Henderson L, Yue QY, Bergquist C, et al. St John’s wort (Hypericum perforatum): drug interactions and clinical outcomes. Br J Clin Pharmacol 2002;54:349—56.

Phenylephrine is a powerful vasoconstrictor, and parenteral administration causes a rise in systolic and diastolic pressures (i.e., hypertension), which may be accompanied by myocardial ischemia (i.e., angina) and/or marked reflex sinus bradycardia and AV block. An increased workload on the heart increases the risk of heart failure. Headache may be a sign of hypertension that can be relieved by administration of an alpha-adrenergic blocking agent (e.g., phentolamine). In general, geriatric patients are more susceptible than younger adults to a reduction in cardiac output following sinus bradycardia.

Nausea, vomiting, and abdominal pain have been reported with the injectable formulation of phenylephrine.Phenylephrine hydrochloride injection. Eatontown, NJ: West-Ward Pharmaceuticals; 12 Dec.Vazculep (phenylephrine) Inj package insert. Chesterfield, Mo: Eclat Pharmaceuticals; 2014 Jun. Mild nausea or stomach upset may occur with non-prescription oral use at usual doses for congestion, but such adverse effects are not frequent. Ischemic colitis (bowel ischemia) has been rarely associated with the use of sympathomimetics, even oral phenylephrine, and may present with symptoms of abdominal pain and bloody diarrhea. Colitis may result from reversible splanchnic arterial vasoconstriction.Ward PW, Shaneyfelt TM, Roan RM. Acute ischaemic colitis associated with oral phenylephrine decongestant use. BMJ Case Rep. 2014 Jun 3;2014. 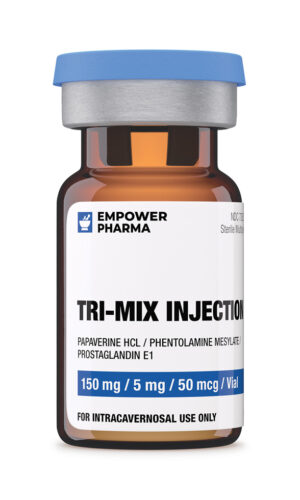